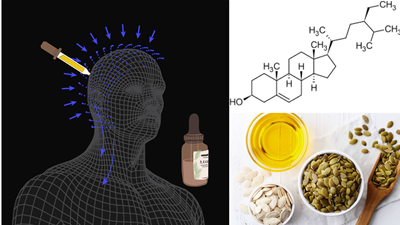 Phytosterols such as b-sitosterol and phytosterol glycosides derive from plants and are plant-based 5-alpha reductase inhibitors. The 5-alpha reductase enzyme converts testosterone into DHT, and DHT is the primary catalyst for triggering genetic hair loss. Beta-sitosterol has been used to treat benign prostatic hyperplasia (BPH), the original condition that finasteride was developed to treat.

In a randomized double-blinded placebo-controlled study, the pilot included men aged 23 to 64, good health and moderate genetic alopecia. The pilot tested liposterolic extracts of Serenoa repens (saw palmetto) and beta-sitosterol. The study's conclusion showed that 6/10 of the participants were rated as improved for the final visit.

One study is not definitive or indicative of the efficacy of a treatment, and however, it is at least noteworthy that some positive studies out there show some effectiveness. That said, any 'natural' anti-androgen shouldn't be compared to proven treatments such as finasteride or dutasteride. Natural anti-androgens are not likely to be even close to as effective as medications. But that doesn't mean you can't include them in your regimen.

Saw palmetto is probably the most popular natural anti-androgen. The real problem with saw palmetto isn't whether it effectively treats genetic hair loss. The problem lies with supplement makers' claims in terms of effectiveness. Saw palmetto isn't a miracle drug. It's not going to stop everyone's hair loss or regrow your hair. But it might be helpful to add as an adjunct, and it may be better than doing nothing for those vehemently opposed to pharmaceutical medications.

In one study, a 24-week trial aimed to look at the efficacy of topical saw palmetto. The study aimed to compare the overall hair count, and the average terminal hair count increased at 12 weeks and 24 compared to the baseline. The patients were satisfied, and the side effects were limited, though the study didn't divulge the adverse reactions.

One study published in a biochemical journal researched fatty acids' and microsomal 5-alpha reductase activity. The study concluded that fatty acids have inhibitory potencies, which vary in strengths. Gamma-linolenic acid is the most potent fatty acid, with oleic acid and linoleic acid being less powerful.

In one study, azelaic acid was a potent 5-alpha reductase inhibitor in human skin; inhibition was detectable with concentrations as low as 0.2 mmol/l. There has been a long history of combining azelaic acid with minoxidil. Unfortunately, the FDA has stopped many companies from producing minoxidil with azelaic acid. Any 'natural' ingredient may help prevent DHT from binding to the hair follicles androgen receptor. Still, it may not do anything if you have an aggressive sensitivity to DHT.

Topical ketoconazole is part of the 'big 3', the top three hair loss treatments you should use in conjunction. Again, it's always better to attack genetic hair loss from various fronts. Treat scalp inflammation, increase the anagen phase, and reduce scalp DHT. If you treat all three of these issues, you will effectively treat hair loss better than just treating one. There were seven articles, two animal studies, and five human trials in various studies. Human studies reported increased hair shaft diameter, and one study showed a significant increase in the anagen (growth) phase. Studies showed a clinical improvement in androgenic alopecia based on photographic assessment and subjective evaluation. Topical ketoconazole is a promising adjunctive therapy, though randomized controlled trials are needed. Ketoconazole appears to reduce scalp inflammation and increase the anagen life cycle. If you combine ketoconazole with a 5-alpha reductase inhibitor, you would be treating hair loss on two fronts.

Natural medications will never be as effective as pharmaceutical medications that are clinically proven to inhibit up to 90% of DHT. However, natural anti-androgens are promising adjunct medications or alternatives if you refuse to take any pharmaceutical drug. A topical formula should contain various high concentrations of these natural anti-androgens, and combining all of these compounds is better than using one. The Hair Transplant Network is in the process of creating our very own natural formula to use as an adjunct or alternative. Stay tuned.