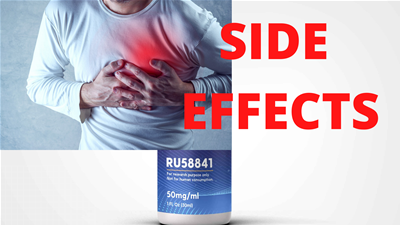 The hair loss industry is a multi-billion dollar industry. Thousands of supplements, pills, lotions, topicals get produced every year, and 99.9% of them don't work. Naturally, the hair loss community gravitates to 'proven' treatments that work. Everyone knows about Propecia and the many horror stories online, thousands of men suffer from long-term side effects, and there are websites and foundations dedicated to raising awareness. Unfortunately, Propecia (finasteride) is one of the few medications proven to work. Today, we'll be looking at RU58841 and whether it's safe to use, and what sort of side effects you can expect.

RU58841 is a nonsteroidal topical antiandrogen developed in the 1980s by a French pharmaceutical company named ProStrakan. Initially, it was developed for androgen-related conditions such as acne, androgenic alopecia, and excessive hair growth (hirsutism). Unlike Propecia, which is a 5-alpha reductase inhibitor, RU58841 does not inhibit the 5-alpha reductase enzyme.

In a study published in the Journal of Investigative Dermatology, researchers compared finasteride vs. RU58841. At the end of the study, researchers noted an increase in hair growth in both groups. However, the finasteride group decreased systemic DHT serum by 70%, while the group treated by RU58841 did not see any decrease in systemic DHT levels. Consequently, this has created excitement among those reluctant to reduce their hormones systemically.

RU58841 Safety and Side Effects

RU58841 had two clinical trials with the FDA, one in 2002 and the other in 2003. Unfortunately, the original company ProStrakan was bought out by Kyowa Kirin. The results of these clinical trials remain unknown, as things weren't as accessible online in those days. Phase I studied 30 men and women. The trial ended on September 20th, 2002. The phase II trials started on October 20th, 2002, and ended on August 8th, 2003. The clinical trial only lasted ten months, which led to speculation online about the drug's safety. One thing to note is the first clinical trial tested a 5% solution twice daily. The second trial tested 2.5% and 5% solutions. This information was retrieved via a Redditor who requested a freedom of information request (FOIA) from the FDA.

Now, official clinical trials list the side effects as the following:

However, there have been several anecdotal reports online about serious heart problems such as heart failure. That said, you can find virtually anything online, so claims made online must be taken with a grain of salt. That said, without the results of both clinical trials and the reason why the drug never went through clinical phase III trials will leave it open to speculation. Drugs have to have some serious financial backing to complete all three trials, but one could argue that a hair loss treatment without side effects would be a goldmine.

To date, RU58841 remains an experimental compound not meant for anything other than experimental use. No other drug company or pharmaceutical company has bothered to purchase the patent or to start their trials.  Is it about money?  The FDA receives funding from the pharmaceutical companies they are meant to regulate, a conflict of interest? I would say yes. Do you have to pay to play to get approval? It seems we can all speculate but will never know for sure. We can also assume that the drug may not be safe for long-term use. It's an open-ended story. Leave your thoughts in the comment section.